Athletes of the Month for March 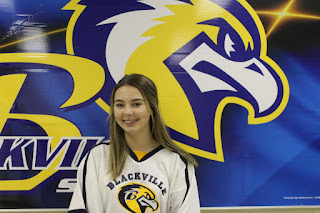 Senior girls Athlete of the Month has been awarded to grade 10 student Jayna Brennan for her involvement on the Senior Girls Hockey team. Jayna is a very hard working player and always gives her best effort when out on the ice. Jayna was recognized for her award because of her strong scoring output during the playoffs for the girls. Jayna scored 2 big goals in the girls do or die game against Neguac to help the team move on. She also scored a goal against Sunny Corner in the girls best of 3 series against them, to help the team move on once again. Jayna then went on to score the only goal in the girls final series of the season against Caraquet. Besides Hockey, Jayna also is a part of the Senior Girls Soccer and Basketball teams as well as the JV Volleyball team. 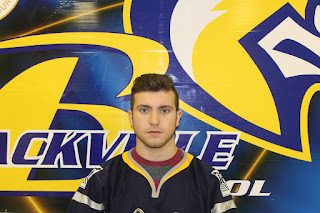 Senior boys Athlete of the Month is grade 12 student Aaron Walls. Aaron has been awarded this because of his involvement on the Senior Boys Hockey team. Aaron had a big month playing very well at the boys Provincials in Renous. Aaron had a 5 goal game in the boys final game of the season, which was an elimination game against Nackawic. Aaron also was awarded the Player of the Game because of his efforts in this one. Besides his scoring, he is a very hard worker and leaves it all on the ice every game. He will be greatly missed by the hockey and soccer teams next season.