Classes of the Month

For the month of September, three classes were chosen for class of the month, one from each of the following grade levels: K-2, 3-5, and 6-8. 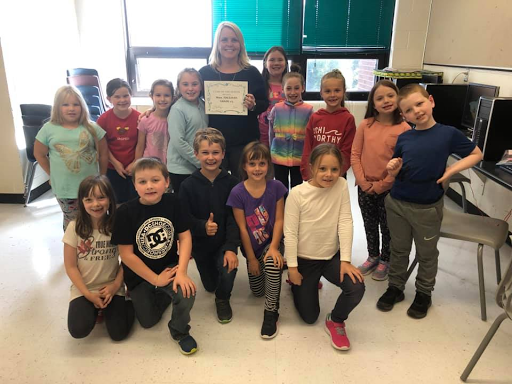 The K-2 class of the month for September was Mrs. J. Hallihan's 2/3 split. This class was recognized for following school policy and being kind and respectful to their other classmates, as well as teachers and other classes. They also demonstrated very good manners and always displayed a positive attitude. 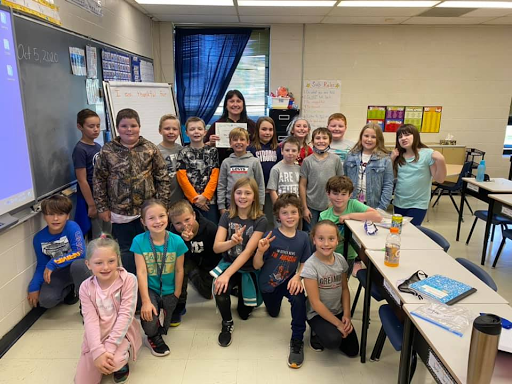 The 3-5 class of the month was Mrs. T. Manderville's 3/4 split. They were also chosen for following school rules and maintaining a friendly and well-mannered classroom environment. They constantly used their manners and always remained cheerful. 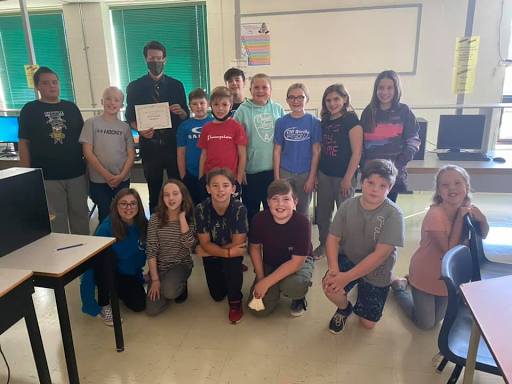 The 6-8 class of the month was Mr. A. Loggie's grade 6 class. Mr. Loggie's class received the award for their great class attendance and strong ability to always be prepared for class.  The students in this class were continually on time and displayed kindness and consideration towards each other and all other classes.

In their first podcast, Anna and Reese discuss the Senior Boys soccer season with team captain Macaully Gillespie and also find out what popular apps students are using.

Athletes of the Month 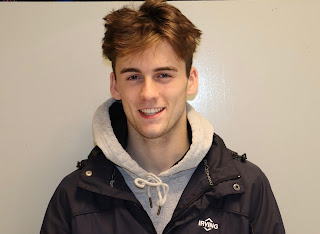 The High School Male Athlete of the month of September is Preston Gillespie. Preston has led our senior boys soccer in offence to a 2-0 record defeating both NSER and BSA. His hard work and soft touch around the net is a threat every time he has the ball in the offensive zone. Great work Preston! 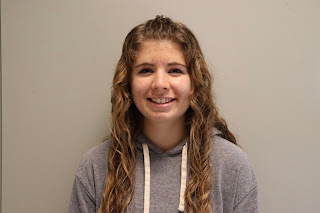 The High School Female athlete of the month of September is Dakota Curtis. She was acknowledged for her positivity and willingness to improve her skills. She is also leading her soccer team in scoring so far and demonstrates a strong work ethic along with good leadership skills.

The Senior Girls soccer team are kicking off the season on the right foot as they are currently sitting at no losses, with one win and two ties. They first hit the field October 21 on their home field, landing themselves a tie of 0-0 with their rival team, Sunny Corner, resulting in Layla Hallihan's first of three shutouts of the season.

The following Tuesday, they came out on top with a 3-0 triumph over Baie-Sainte-Anne, additionally on the home field. Grade 11 striker Dakota Curtis led the way with 2 goals followed by grade 12 mid-field Reese Urquhart with 1 goal. The girls showed great improvement from the first game and maintained possession of the ball 75% of the time.

In their most recent game, the Blackville Eagles challenged CNBA on their home turf in Boiestown. It was a close call but they came out with their second tie of 0-0.

Although the game has changed since last fall as a result of Covid-19, the girls are just happy they are able to compete. With a smaller league and no Regionals or Provincials, the game has adapted to be pandemic friendly. Close contact has been minimized with all players exempt from touching the ball.

"I think they did a good job, trying to make the game as normal as possible, but it is still disappointing that in my last year of high school there is no competitive play. Especially since I really had my sights set on provincial champs this year," said soccer co-captain and grade 12 student Reese Urquhart.

"The season is going well, we are competing even though it is a different type of season with Covid restrictions, but I feel like we are going to finish the season strong," noted Matthew Sturgeon, High School Girls Soccer coach.

The girls next see the field Thursday, October 15 in NSER for their fourth game of the season.

After three games, the Senior Boys soccer team are sitting with a record of 2-1. The boys came out strong in the first two games of the season gathering two wins, but fell short in the third game.
In the first game of the year the boys were looking good as they defeated NSER to a score of 7-0. Only having one practice, the boys were not to sure how they would manage, but that uncertainity quickly changed as the whistle blew. The boys were dominant. Scoring for the Eagles were: Preston Gillespie with 3, Kyle Malliet with 2, and singles from Keaton Walls and River Stewart.

The second game of the year was much similar to the first. The boys again dominated, but this time it was against ERBSA. The following game was held only after two practices. Again, the boys did not know how they would hold up even though last year they beat them all year. The boys came on top with a score of 5-0. Scoring for the Eagles were Preston Gillespie with 3, singles from Hudson Underhill and Caiden Duffy.

The third game is when the Eagles fell short to Stanley. The boys first away game was a loss. They battled hard, but did not succeed as Stanley won 5-2. Scoring for the Eagles was Preston Gillespie and Caleb Gillespie with a penalty kick. It was a hard loss, but the boys plan to get them next time at home.

Will Eardley, a new student who was moved from Manitoba to New Brunswick has stepped in between the pipes this year as Jacob Mercer graduated and hung up the cleats last year. The boys were worried about not having a goalie this year for soccer when Will stepped up and said he would do the job. To start the season he had back to back shutouts, and made some great saves.
By Keaton Walls

This award acknowledges the significant contribution that individuals make to the students and staff of Anglophone North School District.

Logan was recognized for his very impressive actions in response to an unknown visitor at the doors of Blackville School.

While leading a group of his classmates to the bus, an individual who Mr. Logan had not recognized, buzzed in at the main doors. He immediately took action and stopped his friends from allowing the visitor to enter, until the office had approved.

"His quick response was absolutely on point and exactly what we would want all of our students and staff to do. Logan put the safety and security of his school first, and I think he should be recognized for that," said Caissie.

"Blackville School is very proud of Logan's attentiveness to school policy and we are glad to have students like Logan at our school," added Principal Rodney Buggie.