The valedictorian was Ashlyn Moody and the salutatorian was Laura Jardine. Father Gerry Laskey gave the invocation and the benediction was given by John Beach.

Later that evening after the graduation ceremony, the graduates had their all night Safe Grad event at the school.

During the graduation practice on Thursday morning, the graduates spent some time with the elementary students. Click here to see some photos.

The prom for the Blackville School 2016 graduates and their guests was on Saturday, June 18.

The graduation ceremony is this Thursday evening, June 23. 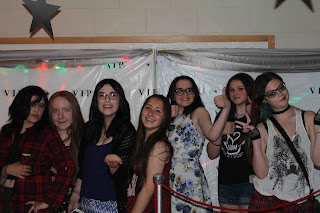 The grade 8 banquet was held at Blackville School on the evening of June 16. It was a fun filled evening with presentations of “The Grade 8 Fun Awards," a meal of pizza, garlic fingers and a sundae buffet.

The banquet concluded with each student receiving their grade 8 certificate and Blackville School t-shirt. Grade 8 student Calvin Keenan offered the thank-you with an invitation to celebrate the rest of the evening at the final Middle School dance.

The Blackville Middle School Staff extends all the grade 8 students a wonderful summer and best of luck in high school. To see more photos from the banquet and dance, click here.

The grade 5 banquet was held at Blackville School on the evening of June 14.

Each grade 5 student could invite two guests, along with the elementary staff.

Guests were treated to pizza, garlic fingers and a sundae buffet.

There was also a photo booth with different props where students could pose for pictures with family members.

Awards were given in all academic areas. The Ron Pauley Memorial trophy was awarded to Tessa Munn. This award recognizes leadership in athletics.

The students also performed their version of the song "My Church" as "My Class." For more photos from the banquet, click here.

Moody, who is a goaltender, played with The Miramichi Rivermen of the NB/PEI Major Midget League this past season. He was selected 130th overall (8th round) to the QMJHL.

Moody recently answered some questions for The Blackville Talon about the draft:

How did you feel? What were you thinking?
It was a dream come true. Especially to an organization like Victoriaville - a lot of new territory and people and more importantly an opportunity to make a Major Junior Team. Getting my named called was extremely exciting, and I am thankful to have the chance to showcase my talents at a higher level of hockey.

What does this offer mean to you as a person and as a hockey player? Why is it important to you?
Playing in the QMJHL has been a goal of mine for many years. Being able to be part of Victoriaville’s organization will hopefully open many doors for my future playing hockey and give myself a better chance to play on the team. Being drafted is an incredible way to pursue my hockey dream.

When do you start?
The training camp will take place in Victoriaville in mid-August.

Do you have anything you need to do in preparation?
Over the summer I would like to put on some weight and work to get faster and stronger, as well as getting on the ice as much as possible.

What will be your plans after you graduate and what your hopes for playing hockey?
Right now I am focused at taking one step at a time to play the highest level of hockey possible. As for next year, I will attend both the QMJHL training camp and MHL training camp and return to the Rivermen if I am not successful in cracking either lineup.

Blackville School students recently raised a total of $1100.00 through various fundraising initiatives for the Josie Foundation.

The fundraising campaign was organized by the High School Student Council.

According to its website, the Josie Foundation "is a non-profit incorporated Foundation whose aim is to establish, receive and maintain a fund for the relief of economic hardship for individuals (families) within the Miramichi area who may be encountering financial difficulty as a result of a life threatening illness."

For more information on the Josie Foundation, click here.

A video submitted in April by Blackville School grade 12 students for this year's Safe Grad Initiative students was recently awarded just over $1300.00.

The Safe Grad Initiative is sponsored by Alcool NB Liquor (ANBL) in cooperative with the New Brunswick Department of Education and Early Childhood Development.

A total of $20, 000 is offered to winning submissions to help fund safe grad activities. The value of the awards are dependent upon the quality of the submissions.

The objective of the Safe Grad Initiative is to promote responsible choices among teenagers when celebrating high school graduations.

The video created by the four students at Blackville School provides some statistical information as it recounts a tragedy that occurred due to drinking and driving.

Grade 12 student Brook Underhill received the Fenton Sturgeon Memorial Award which is awarded to a grade 12 student who has been involved in sports for all four years of high school. Special consideration can also be given to students who have volunteered their time coaching younger athletes outside school hours.

A student from each grade level came to Blackville from all over the District to compete in the Spelling Bee against their peers.

The students had already won competitions held in their own schools, and were now competing to see who would be the ‘Grand Champion’ of their grade level.

With hard words like “cleanliness,” “contagious” and “receive,” all of the K-5 students provided an impressive display of
literation.

For more photos from the event, click here.
The winners are as followed:

Article and photos by Jules Keenan

The choirs have had a busy year. In April, both the Blackville School Girls’ Choir and Elementary Choir were recently awarded the Gold Standard in the Miramichi Regional Music Festival for the third time this year.

“This has been the third year in a row since the festival has been back in business,” said Miss Catherine Frenette, Choir and Band Director. “I’m really proud of the students for their hard work and dedication.”

The concert featured renditions of songs by popular artists and all-time classics. The band opened the night with the song, “It Don’t Mean A Thing, If It Ain’t Got That Swing,” by jazz artist, Duke Ellington.

“We worked really hard to make this night possible, and I am proud of all the work we did,” said Noah Donovan, grade 10 student and devoted band member. The band has been practicing for four and a half months, alongside the Blackville School Girls’ Choir and Elementary Choir.

The Girls’ Choir began their part of the night with the Latin selection, “Laudate Dominium,” and finished it off with,” Best Day of My Life,” by American Authors. Miss Frenette dedicated this song to the five students who are graduating this year: DeAnna Donovan, Mackenzie Jardine, Ashlyn Moody, Kali Nicholson, and Amelia Underhill. Some of these students have been involved with the Choir since the second grade.

“You girls have been an asset to our choir over the years and will be greatly missed next year,” said Frenette. “I would like to take this opportunity to wish each of you much success in your future endeavors.”

Miss Catherine Frenette has been working at the school as the music teacher for 29 years, and has devoted herself to both programs offered at the school since her arrival. “I have had a fabulous year working with all of the students,” she said.

Frenette has also posted a card outside of her room thanking each of the students for their hard work, which made the night such a success. For more photos from the concert, click here.

Photos and article by Jules Keenan