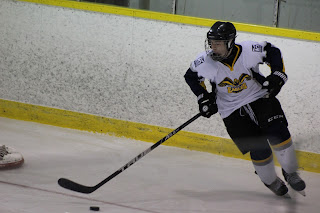 Over the weekend the boys hockey team traveled across New Brunswick to participate in an extensive tournament in Hartland.

The boys started out strong, winning against Saint Quentin, 7-2. Scoring for the Eagles were Peyton and Preston with three goals each, and Landon Coughlan with one.

They became victorious again with the second game they played, the score was 4-3. Scoring for the Eagles were Peyton with two, Preston got one and Denver scoring on a power play.

While the odds were looking good for the boys, they stepped off the ice sadly losing to Hartland, 7-3. Ty Croft, Macaully Gillespie and Denver Donovan scoring the three standing goals.

The boys were upset to lose their last game in the tournament, but they could hold their heads up after hearing the news that Hartland won the whole tournament, so they were beat out by the best team present.

Monday night the boys basketball team played Sunny Corner and played hard, but still walked out with their heads hanging, the score was 89 to 61. This just shows our boys that victory is not easy and you need to work for it!