Students and staff raise over $2500 for Terry Fox Foundation 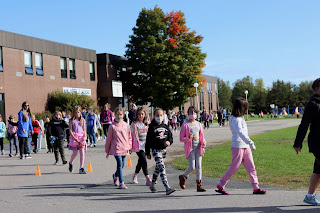 The students and staff at Blackville School participated in the annual Terry Fox Run on September 29th.

Even though it was a nice fall day for a walk, Grade 10 students Layten Jardine and Eddy Manderville said, "I wish it would of been a little longer so we could miss more class time but we enjoyed it." High School students Brody Underhill and Joshua Gibson added, "it was a little cold."
Blackville School elementary teacher Ms. Waugh said "it is such a good cause, everyone has loved ones that have been touched by cancer or some type of disease looking for a cure. The students were very engaged. They all had their stickers on, and it was really personal." 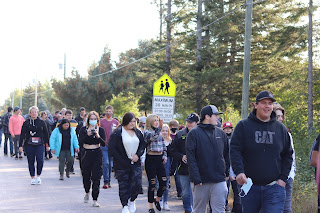 The Terry Fox run is something that the Blackville students participate annually to remember Terry Fox, his journey and his bravery. All together the school raised $2548.30 for the Terry Fox Foundation. To see more photos from the event, click here.
Article by Jasmine O'Donnell