High School students are shown the “damages” of impaired driving

Mothers Against Drunk Driving (MADD) Canada came to Blackville School to present a newly made film called “Damages” on October 5. André LaFlamme from MADD gave a short introduction and then proceeded to show the film.

The intended goal of the presentation is to reduce the amount of drunk drivers among teens. MADD would like to see teens reflect upon their ultimate decisions, between driving under influence or getting into a vehicle with someone you know who has exceeded the legal limit.
Grade 12 student Melissa Underhill said, “the testimonials were the hardest to watch.” Underhill added that she could relate to the mother because she is the same age as the daughter she lost as a result of a drunk driver.

Grade 9 student Whitney Tucker said, “the movie was the most effective; because it was so real.” She felt the acting was really good.
LaFlamme will be taking the presentation to over 300 schools across Atlantic Canada, and Quebec, in hopes that students will begin to think before they act. 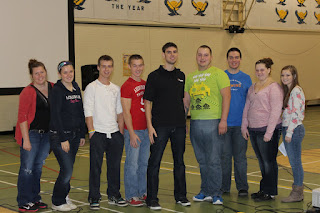