Spring Concert Held on May 30 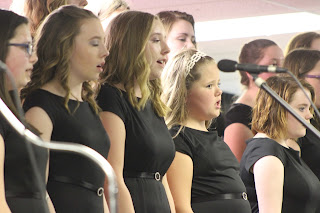 The Blackville School elementary and girls choirs, along with the jazz band, performed for the community at the annual Band and Choir Spring Concert on May 30.

This was the final performance of the school year for band members, and the second last performance for the choir.

It was also the last time many of the students would be directed by music teacher Catherine Frenette, who will be retiring.

Both the choirs and the band had been practicing for this event and dedicating time out of their days to make sure that it went well, and they really delivered.

The concert started off with four songs performed by the jazz band and grade nine music class. They began with "In the Mood" which was followed by the Beatles song "Hey Jude." "Hello" by Adele was then sung by Amber Walls in grade eleven, and accompanied by a few members of the jazz band.

The band then ended their performance with "Rock Around the Clock". The community always respond well to the jazz band's concerts, and this was no exception. The final band performance of the year went smoothly, and the members should be proud of themselves. 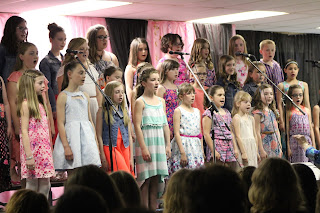 A short intermission followed, and the choir took the stage. A wide range of group songs, solos, and duets were performed, and every member did an excellent job with their pieces.

The songs were sung perfectly, and the audience could tell that a lot of practice had went into this performance. The choirs at Blackville have never disappointed at a concert, and they certainly kept it up. Clearly the long hours of rehearsals paid off.

There is no shortage of musical talent at Blackville School, and the annual Spring Concert is an excellent representation. All performers did a great job, along with Ms. Frenette. It's safe to say that practice really does make for a perfect concert.