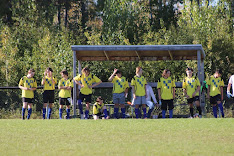 The Senior Girls had an amazing season this year winning the first girls provincial banner in school history and to top if off they went undefeated all year.
The Senior Boys soccer team had a season full of ups and downs. They lost a couple of players who were unable to participate, but were able to fight hard all season.

The middle school boys had a good season this year, but lost to Sunny Corner in the semi-finals. The boys played great all year and never gave up when the games got tough.

The middle school girls had a solid season this year and they played hard in all of their games - win or lose. The coaches would like to wish good luck to all the players moving to play in high school.

The two Elementary Soccer team battled it out for the KD cup on October 14. Team 2 was able to beat Team 1 in a very entertaining game and they were able to celebrate with the KD Cup. Both teams put up a great fight this year and played hard in all of the games.