High School Student of the Week 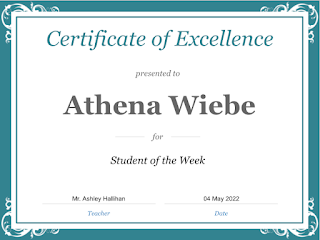 "Athena recently released her own novel, which is an amazing accomplishment," said Mr. Hallihan. "Since her arrival to Blackville School, Athena has been engaged in her technology project and just used GlowForge technology to create a custom arm band out of leather," he added.

The other students nominated this week are Daylen Underhill, Matthew Underhill and R.J. Furlong.

Congratulations to Athena and all the other nominees.