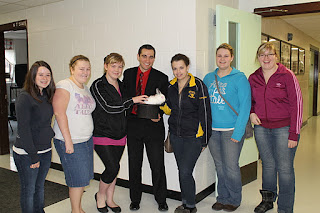 Magic happened at Blackville School on December 16 as Rémi Boudreau a bilingual magician came for a visit.

Boudreau was brought to the school through a bilingual fund that each school is presented with based on student population.

A school committee, headed by vice principal Aaron Johnston, Carrie Trevors, Carlene Lyons and Janice Jardine came together to share ideas on how to spend the fund.

It is a goal of the school to incorporate many elements of bilingualism within Blackville School. Planned initiatives like morning video announcements in both French and English at least once a week, as well as O’Canada sung in both languages at ceremonies and announcements.

Vice principal Aaron Johnston said that Boudreau is a good example of someone who functions well in both languages, and who has made a successful career as a bilingual performer.

After two successful years, the school hopes to have Boudreau return again and help to foster a positive attitude for bilingualism.