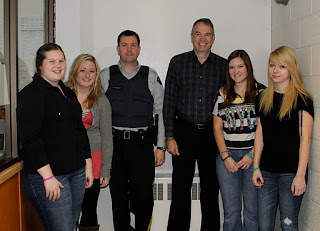 A “Synthetic Drug Presentation” was held at Blackville School on November 21. The presentation was held by School District 16 and City of Miramichi Police Force.

There were four main drugs that were the focus of this presentation: Crystal meth, ecstasy tablets, ketamine and GHB. Each drug was identified and given clear explanation of what they were and what they can do to a person’s body.

Students were shown real life instances of people who were affected by methamphetamines, videos and pictures were used to display the tragedies that befall people and their families every day.

McCann also said that a high percentage of people who use meth for the first time get addicted. The main message given by both the RCMP and McCann was “Be smart- don’t start.”