The girls started off their season with a tough loss in the fifth set to rival NSER. Veteran players Maggie Jardine and KC Hallihan still had hope in their team and believed in their skill and ability to succeed.

This enthusiasm carried over into the next 6 games against Dalhousie, Campbellton and Carrefour Beausoleil where the girls went undefeated. NSER put an end to this streak, but the girls still headed into Regionals with second place. 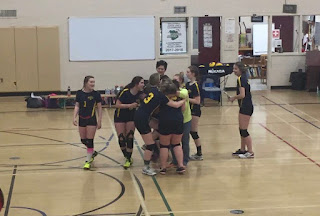 The girls showed up to play and found themselves topping Dalhousie in the fifth set 19-17 to head to Provincials in the 1st place slot. Booking their ticket to the provincial weekend did not come easy or without an abundance of hard work and dedication to the sport throughout the season.

As the girls rolled into Provincials, they were set on one goal: the provincial final. They had a chance to do what no other volleyball team from our school could do before and they succeeded to the best of their ability. Each set was a challenge, but our Eagles were able to rise to the occasion and come out on top each time. Another tight game against Dalhousie landed our girls in the finals.

After a hard fought battle against a fast and well executed Tobique Valley team, our girls recieved a provincial silver medal, naming them the 2nd best "A" level Junior Varsity Girls Volleyball team in the Province of New Brunswick. Coaches Marilyn Underhill and Cheryl Buggie were extremely pleased with the powerhouse squad they coached this season.

A congratulations is in order for the girls. Their hard work will certainly not be forgotten anytime soon. The younger players are extremely proud with their accomplishment and excited to see what next season will bring. This season was certainly one for the history books!

The Varsity Girls Volleyball team also had a fantastic season, showcasing a lot of volleyball talent that our school has to offer. The girls headed into a regionals, with an exceptional season under their belts.

Playing a total of 12 sets, during the regional weekend, our girls showed up to play and won 10 of those 12 sets. The girls started off the regionals, in a pool with Dalhouse, Minto and Chipman. They ended the round robin playing at the top of their pool and headed to the cross overs against long time rival NSER.  This was the most important game of the season, as the winner was headed to Provincials.

Our girls didn't miss a beat, blocking, attacking and placing each and every ball correctly, landing themselves a ticket to the golden weekend. A placement game was set against Rogersville and Eagles soared, coming out on top, beating them in two straight sets.

The girls are ranked number 1 in the NorthEast of the province as they head to ESN to take on one final weekend of volleyball. Senior players, Abby Donovan, Darian Donovan, Olivia Buggie, Amber Walls, and Erin Moody say they are on cloud 9. Having the chance to capture one final Provincial title is always the best way to end off their High School sporting careers.

The hard work and dedication that the entire team has put into this season was shown on the court and helped our girls excel to the top of the pack. The girls are set to play Kedgewick at 12:00 on Friday May 25 at ESN.

A big congratulations and good luck is sent to our girls. No matter what the outcome, our girls always leave it all out on the court and play with their hearts for the blue and gold.

By Marlee Schofield and Daniel Richard