A Variety of Talent at Second Annual Coffeehouse 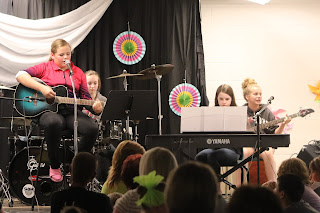 It was an evening of music, dance and even martial arts at the Blackville School's Second Annual Coffeehouse Variety Show on Wednesday evening.

Jayda MacDonald and Chloe Hambrook were the Masters of Ceremonies and the audience was entertained with a wide variety of musical talent including the Elementary Choir directed by Mrs. Lori-Anne Curtis. Danica Mullin performed "Riptide" by Vance Joy which was followed by Jayda MacDonald's rendition of "Rise Up" by Andrea Day.

Drea Hallihan entertained the crowd with Sam Smith's "Dancing with a Stranger" followed by Amber Walls and Amy Walls performing Kenny Chesney's "Get Along."


Guitarist Chloe Furlong traveled back in time with the audience as she played some old favourites, and the theme was continued with a classic Bon Jovi tune performed by Helena Arbeau with Logan Crawford, Dan McVicker, Jordan Jardine and Brady Nash. Arbeau, Crawford and MacVicar then entertained the crowd with "Wanted Dead or Alive" and "Mad World."

Returning to a calmer performance, singer Cassidy Coughlan performed Megan Trainor's "Kindly Calm me Down." Her performance was followed by guitarist Emma Sturgeon and then Randi-Joe Sturgeon sung "Lost Boy."

The MCs then mentioned the  D-Day Memorial services in France and some of the students at Blackville School who travelled overseas to participate. This was followed by the song "Travellin Soldier" performed by Tessa Munn, Eden Lynch, Hailey Coughlan, Abigail McEvoy and Cayden Hallihan.

There were some further dance performances by duo Kate Sturgeon and Kalainy Jardine and also dancer Allison Manderville. Chloe Curtis was the last act of the evening with a dance performance to Billie Eilish's "When the Party's Over."

To see more photos from the event, click here.