It's a newer club at Blackville School, and it's growing in popularity. In fact, the Blackville Middle School Mountain Bike Club has grown extensively over the past two years.

Blackville School teacher Mr. Paul MacKinnon started the club in the fall of 2015. There was interest in the club, and 18 students participated. However, many of those students went on to high school this year.

But many grade six students expressed interested in the club, and the club has even more members this year with a total of 26 students participating. There are also some female students who joined the club this year. The club originally had 9 mountain bikes for members who needed a bike to participate, but that number recently increased to 14.

MacKinnon explained that students like the club for many reasons. He jokingly said, "some like trying to see how filthy they can get by the end of a run." "Others like simply getting out for a ride with some like minded people. Some participants want to be challenged to climb steeper inclines and go fast. Still others just want to 'wheelie' and 'catch air'." 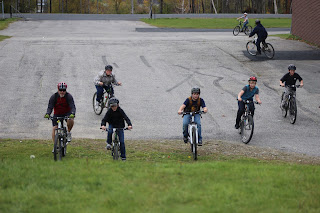 As a sports-minded individual, starting the club was a good fit for MacKinnon. "Mountain biking is a passion of mine. One can always be building upon their technical skills and fitness, so it is a great sport to introduce to students," he explained.

"I love seeing kids progress with mountain biking, witnessing them conquer some terrain that used to spook them is pretty cool," he added.

MacKinnon also likes the flexibility of the sport. "With traditional sports you need a small crowd to make it happen. Mountain biking sessions can be as big or small as you want," he said.

"A lot of people start mountain biking a little later on, when opportunities to play traditional sports are harder to make happen. Exposing the students now will hopefully ignite the spark for them to continue riding," he added.

Grade 8 student Caleb Gillespie said he became a member of the club, "because I love mountain biking. It is a fun sport and I can learn how to do different tricks on the bike, like wheelies."

Grade 8 student Lane Weaver agrees. "It allows me to do another fun activity outside of school. We do it once a week, and we also get to go to French Fort Cove at the end of the month, so that's a plus."

The club is planning another run at French Fort Cove in the City of Miramichi to close down their fall season sometime this week.

MacKinnon explained that the cove is mainly a single track riding on some 15-20 kms of groomed mountain bike specific trails. "There are lots of hills, rock features, bridges and many more obstacles. It is one of the top places to ride in the Maritimes," he said.