Athletes of the Month - November

Daniel Richard is one of the most dedicated athletes that Blackville School has ever seen. He spends most of his free time with a basketball in his hands. His dedication to the sport helps him shine on the court. Richard is an extremely hard worker and never gives up on a play. He goes hard until the final whistle has blown. Richard also is a great aspect to keeping the team going. He has team building skills and always rallies our boys before and after the games; no matter the outcome. Daniel Richards fantastic energy transfer onto the court and into his game. Richard is most definitely the most pumped to get on the court each and every single day.

" I believe we have a very hard working team and players who will do what they are told by coaches. The team shows a lot of hustle and effort every game, and that is the first step to being a very good team. Our team is a defensive minded squad and the key to winning Basketball games is always defence. I believe we have a chance to repeat our success from last year and possibly even improve on it. Last season we hosted regionals and then went to sectionals where we lost to Harvey, the three time defending champs. Last season proved that our teams hard work has been paying off and that we can compete with the South side of the province which has always been considered the much stronger side in Basketball. I am excited to see what the remainder of this season has in store for us." said Daniel Richard.

Peyton Gillespie is an important part of the Senior Boys Hockey team. He is a play maker and his efforts help create many offensive chances for our Eagles. Gillespie has a fantastic work ethic, he never gives up on the play. He always finds a lane to thread the pass through to his line-mates. At this point of the season, Gillespie is sitting at about 3rd place on the team for points production. Peyton always comes to practice and games prepared to give 110% on the ice. He is a committed player and never misses a chance to get out on the ice. Gillespie's attitude is a key factor in his play, his positivity translates onto the ice and helps keep the boys rolling. He's a hard working player and shows a true love for the game. Gillespie is a skilled player and has a great knowledge of the game. So far, the coaching staff has been extremely pleased with Gillespie's play and his ability to give great efforts everyday. "Play to win; Expect to win." Gillespie has high hopes for the season, the boys are rolling and hoping for many more wins and success.

A hard decision was faced for the Basketball Athlete of the month and Abby Donovan was chosen.
Donovan has been Captain of the team for the last 2 years. She always pushes herself until the last second of every game, giving her all. Donovan shows true leadership on and off the court, she is a real leader for her teammates. When the team is down, Abby seems to be able to pull the team together with heads up plays. She never argues or questions anyone on the team, Abby is always game for whatever the coaches ask of her. She is always happy and extremely fun to coach. Donovan is a big factor for our basketball team as she records lots of points for our girls. Donovan also participates on our Senior Girls Hockey team, she is an all around great athlete and fantastic to coach. 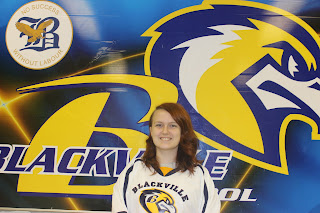 Cassidy Coughlan is a big factor to the development and future success of our Senior Girl Hockey team. Coughlan is an extremely defensive player coming up big in the blue and gold end. She also creates many offensive opportunities for our girls. Coughlan's mistakes are few and far between. She is a very disciplined player. Coughlan transfers her play in practice to her game play and listens well to the coaching staff. Cassidy has been a silent leader on and off the ice.


Middle School Boys Athlete of the month for November is Camden Curtis. He is a player on the Middle School Basketball team. Curtis is a very strong athlete and it shows in his play. He has a disciplined work ethic and works extremely hard at practice. Camden has been performing very well in his first basketball season and the coaching staff is extremely pleased with his play on the court. Curtis is on pace for a great first season.


Middle School Girls Athlete of the month for November is Abigail McEvoy. She is a great force on our Middle School Basketball team. McEvoy is an all around team player and is always working towards the teams success. She works hard in practice and games, always giving her best efforts. McEvoy has been improving her skills every single time she sets foot on the court. Her dedication to the sport translates to her play on the court. Abigail has shown great improvement and commitment to the team this season. The coaching staff has high hopes for her this season.