Senior Girls and Senior Boys soccer teams were both undefeated going into the final weekend of soccer action for the month of September.

Senior girls defeated NSER 1-0 to set the tone high for the 2017 season.  Erin Moody had the lone goal.  They then went on to tie NSER 2-2 and Stanley 0-0 the following week; scoring for the Eagles was Tori Sullivan and Laura Colford.

In an exciting tilt vs BSA, the girls rallied back being down 2-0 after the first half to defeat BSA 4-2.

Abby Donovan lead the way with 2 goals and 1 assist, while Tori Sullivan and Laura Colford each had a goal. The girls followed up with a strong 6-1 win against CNBA, leading the way was Abby Donovan with 2 goals. Other goals came from Olivia Buggie, Hayley Underhill, Tori Sullivan, and Jaime Vickers.

Senior Boys started off the season with a nail-biter game vs Stanley, coming out strong with the 2-1 win.

Garett Donahue made fantastic efforts in net, saving a for sure goal, in the dying seconds of the game, along with Drake Donovan and rookie Preston Gillespie with the goals.

The boys then downed NSER 9-3. Aaron Walls lead the way with 3 goals and Preston Gillespie with 2, other goals were scored by: Avery Brennan, Peyton Gillespie, Drake Donovan, and Ethan Whalen.

That week, the boys also defeated DRHS 5-1 in a well-rounded team effort, goals were made by Aaron Walls, Avery Brennan, Peyton Gillespie, William Schofield, and Drake Donovan. The boys followed this up with a strong game against BSA defeating them 13-0, goal scorers were: William Schofield, Aaron Walls, Peyton Gillespie, and Preston Gillespie with 2 each.  Single goals were by Daniel Richard, Denver Donovan, Drake Donovan, Avery Brennan, and Ethan Whalen.

The boys followed this up with a huge 3-0 win against a strong CNBA team, Avery Brennan, Aaron Walls, and Preston Gillespie scored the goals.

In middle school boys soccer action, the boys lost their first game 3-2 against Max Aitken, goals were scored by Thomas Dunn and Hudson Underhill. In their next game, the boys started out slow falling behind early to Natoaganeg before battling back to capture the 9-6 win. Leading the way for the Eagles was Thomas Dunn scoring 5 goals, and Hudson Underhill with 2. Other goals were made by Kyle Maillet and Kale Hallihan.

In Middle School Girls soccer action, the girls were downed 3-1 by NSER; Hailey Singer had the lone goal.  The girls game back swinging in their next game, beating NSER 4-0.  Kensen Brennan headed the mission with 2 goals while Jorja Donovan and Emma Hallihan had one goal each.

Layla Hallihan's extraordinary efforts in net ended with her first shutout of the season.  The girls lost to Gretna Green 5-1. Caiden Hallihan scored for the Eagles.  The girls beat Nelson 1-0 in a nail-biter, Abigail McEvoy had the game winning goal while Layla Hallihan earned herself another shut out in net.  The season looks very promising for the girls. 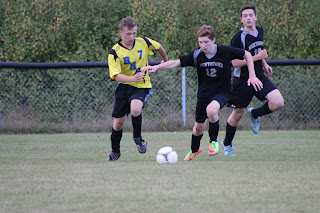 Senior Girls player, Marlee Schofield has high hopes for her grad year.  She believes that the team has a lot of potential to go onto Regionals and hopefully Provincials.

"We suffered a huge blow with the loss of power forward Erin Moody, but we were able to rally back strong and continue on with our undefeated streak.  As long as we continue to be first to the ball and win every battle, we should stay on track for an untouchable season.  Filling the gap that losing Moody has created won't be easy but I know that we have the team to do it.  We've shown how resilient we are so far and will continue to be.  We've got lots of power up front and plenty in the back end too.  We have an all-around team with great offence and fantastic defence, only the future will tell what is in store for us."

We caught up with Senior Boys soccer captains Daniel Richard and Jesse Frenette. Daniel believes the boys have a shot to make it back to Provincials for a fourth straight year.

"We have lots of goal scoring along with strong defence, we have a very fast team and have to use our speed to our advantage. Every year we have used our speed to our advantage if we want to continue to be a top caliber team we need to keep doing that. I think we have one of the strongest teams we've ever had and that gives me high hopes for winning another banner, after coming up just short last year. We have to keep practicing and working hard if we do then there's no reason we can't compete. I can't wait to see how the season goes," said Richard.

Jesse Frenette believes the team is strong this year and has high hopes of going far this season.

"I believe all around we have a strong team.  We have great strikers and athletic mid-fielders.  Our full-backs are nothing to slouch on either we have some great defensive powers.  Keeping in shape is going to be important this year; we have to continue practicing and working on our rough spots.  We have a very athletic team this year, and we have to capitalize on our speed.  I think we have a provincial caliber team this year and as long as we stay supportive and help each other along the way we should do quite well," explained Frenette.

By Marlee Schofield and Daniel Richard