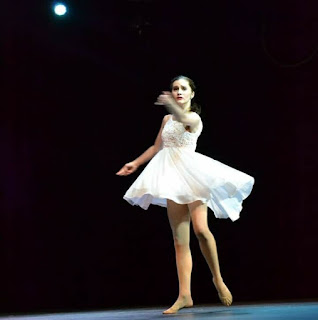 Abby Keenan participated in Dance Quest 2017 on November 2 to November 5.

Keenan had 11 routines and three of those were solos.  When asked what her favourite routine was, Abby said, "I don't really have a favourite, but I really enjoyed my three solos."

Abby received many awards at the competition.  She was awarded with 6 gold, 2 bronze, and 3 silver.  Keenan received a medal for every routine she was in.

Along with her many, many medals, Abby also received three scholarships, which were never before all given to the same person.  She made history that day.

The first scholarship Keenan received was a scholarship to New York.  She would get the opportunity to take classes with Broadway teachers and choreographers and train with the Rockettes.  She will also be there to ring in the New Year.

The second scholarship that Abby was awarded was a spot on a dance team that will be travelling to the Dominican Republic to compete in the summer of 2019.

The third scholarship she received was a guaranteed spot on Canada's National Dance team, who will be travelling to Spain in the summer of 2019.  With this team, Keenan will be competing in what is known as the Olympics of Dance.

Both teams that Abby received a spot on are travelling at the same time, so unfortunately she does not get to do both.  She decided to accept the scholarship that guarantees her a spot on Canada's National Team.

Abby said she was  "very surprised" to receive all three recognitions.  "It was overwhelming and I could not believe it because nobody has ever won all three before," she said.

She mentioned that before the competition, one of the judges reached out to her and another BHS student, Anna Sturgeon, to talk about opportunities.

Abby informed us that it was only her 2nd year on the competitive team.  She said, "I just kind of started it and kept going.  I've been dancing at home since I was really young."

Social media helped to inspire Abby to pursue dancing. "I always saw stuff on social media, like famous dancers and really talented dancers. I just decided that I wanted to be good like that, so I kept working at it."

The Blackville School community is very proud of Abby and all of her accomplishments.